Home » News » In the beginning…

Let’s go back in time to 2011. You may recall events like the unforgettable royal wedding of Kate Middleton & Prince William, the passing of the music legend Amy Winehouse, the devastating breakup of R.E.M after 31 years of making music together, the banding together of wall street protesters as the “99%”, and when a wild tornado tore a path of destruction through Joplin. The world as a whole seemed to be on a pivotal point in 2011 and this was true for the lives of Melanie & Luis Colón as well.

The couple lived in Portland, OR in a high-rise luxury apartment building overlooking the Pearl District. Luis was often out of town on the road for his demanding sales work and Melanie was holding down a part time job as a phlebotomist and in school working on her prerequisites for an accelerated nursing program. So, when Melanie was home in their apartment she was often alone which actually worked out great as she had a quiet space to study. Most of the time any way.

One night, Melanie had been up late studying for a difficult anatomy and physiology final when she finally decided to call it a night and get some sleep before her important day. Just before counting that final sheep, Mel’s night was suddenly changed when she heard the sound of what can only be described as a helicopter flying low overhead. It wasn’t that, not even close – it was the sound of our neighbor showing off his fancy surround sound while watching an action flick.

Annoyed and finally fed up and wanting to take control of the situation, Mel sat up, waited for the next boom and started pounding on the wall like Mike Tyson did to anyone who jumped in the ring. Nothing! Still the bass was coming in loud and clear. What’s left? Finally, she decided enough was enough and threw on her robe, tossed on her nerdy old glasses, and did something with her hair so she didn’t look completely insane, and marched right over to knock on that neighbor’s door. KNOCK!!! KNOCK!!! KNOCK!!!

Fortunately, he cracked opened his door and annoyingly asked – “What?” Melanie explained what was happening as nice as she could so the neighbor would hopefully oblige to her request. He agreed and closed the door with an eye roll. Melanie felt accomplished and walked back to her apartment feeling relieved to finally get some sleep. Just as she laid down, snuggled in – the BOOMS started up again. Her heart started racing, and she didn’t know what else she could do, so she called Luis for help.

Unfortunately, there was nothing Luis could do as he was out of town for work and there were no property staff around to help with the situation. They both agreed that Melanie should talk to the property manager in the morning so the problem wouldn’t happen again. So, she did just that, the next day Melanie went to the property manager’s office to explain what had happened. The manager listened, but explained their hands were tied, as they were not around when the incident happened and there was no evidence to prove the neighbor was actually in the wrong.

This was really frustrating for Melanie & Luis. They thought there is so much technology available today, there has to be something they could use to help them with these situations in the future. They researched like crazy and even talked to some of their friends who were property managers at other buildings to see if there was a solution they didn’t know about. But there was absolutely nothing. Everyone they talked to agreed there should be a better way of asking a neighbor to quiet down, stop smoking, or attend to their pet for instance. These issues were very common for all residents but somehow old traditional methods were still being used when an easier solution should have been available especially in such a technology driven world.

This problem really struck Luis and Melanie and they decided rather than giving in, they were going to develop the solution themselves. After months of brainstorming and bouncing ideas off their friends, family and neighbors, they came up with the first feature of Apt. App and one the world had not seen before. The neighbor-to-neighbor notification feature was developed to forever put a stop to traditional methods of notifying a neighbor like pounding on the wall. Their technology would rather allow a resident to anonymously notify their neighbor of a disturbance without leaving their apartment. Offering a convenient way for all residents to resolve common neighbor issues quickly, safely and conveniently no matter the time of day.

From that time in 2011 on, Melanie & Luis have been on a mission to prioritize the resident living experience. Over the years they continued to come up with ways their technology could improve communication between and among staff and residents as well as cultivate strong communities so the people living there could feel a sense of belonging and purpose. Now there is nothing more that Melanie & Luis enjoy hearing than a crazy neighbor story or how Apt. App has made a positive impact on someone’s living experience. Because they know all too well what it’s like to be a resident without a voice. 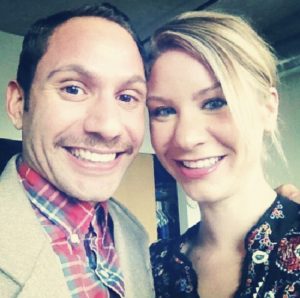