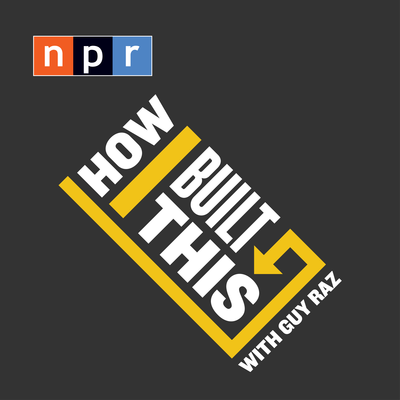 NPR “How I Built This” – It Never Hurts to Try

A global “podcast about innovators, entrepreneurs, and idealists, and the stories behind the movements” featured Apt. App at the end of the Compaq Computers episode May 22, 2017.

If you don’t know about NPR’s “How I Built This” podcast. You should! Whether you have had a start up company or not, the journeys shared of successful entrepreneurs like Mark Cuban – serial entrepreneur, Tony Hsieh – Zappos, Richard Branson – Virgin, or Barbara Corcoran – Real Estate Mogul, to name a few, are so grounding and motivational!

Luis and I are obsessed with “How I Built This” and listen religiously every week. I’m pretty sure if Guy Raz the host of the podcast called us to chat, we would feel like we are old friends because, well his voice is so friendly! But also because we listen to him every week as he helps to tell the incredible stories of these famous entrepreneurs and gives us the drive to keep going as we trudge through the tough path of entrepreneurship ourselves.

At the end of each “How I Built This” podcast is a segment called “How You Built That” where a new start up story is featured. For months I listened to the podcast and thought, “How cool would it be to be on that segment…. Naw! We aren’t big enough to be on that segment!” For months, with every episode I would have this self-talk. I even looked up the application on-line but talked myself out of signing up, time and time again.

Then one bright sunny day, I was walking around our local lake with my dog Ziggy and something struck me. “You know what! What is the worst that can happen? They never write me back after I submit our application? Screw it! I’m going to submit the application right now!” And so I marched home, and went straight to my laptop to submit our application. Done! Let’s see what happens.

To my surprise, only a couple days went by when I got a call from Claire Breen of NPR asking me if I would be up to doing a mock interview as somewhat of an audition. Claire Breen!?! I heard her name every week at the close of the podcast as they list off the “How I Built This” team. It was surreal! “Sure!” I said! “I am open to an interview now!” She agreed and fortunately I was at ease talking with her so the interview was easy. I was excited to tell her about Apt. App and all the hard work we have put in to make it successful and the traction we have gained. After that interview Luis and I held our hopes high that we would get the call that we made it to the “How You Built That” segment. We were shocked when only a few days went by before Claire reached out again and told us we made it!

The interview day came before we knew it. I really wanted it to be Luis and I on the interview, but because of issues with background noise using a speaker phone they could only do the interview with me. I was so nervous! “Is Guy Raz going to be interviewing me? If so, I am going to have a serious celebrity moment!” “Am I going to sound stupid? Nervous? Inept?” My head was spinning and Luis was so nervous he couldn’t even stand to be near so he went out side to chip at some golf balls sending good vibes.

It turned out I did not interview with Guy Raz, which was probably a saving grace as I could actually compose myself. I rather had the interview with Claire Breen and Neva Grant, who I was star struck with as well but they were so friendly and really helpful through the interview process which helped put me at ease. But I was in fact nervous, and thought I sounded stupid. But when the segment aired I was pleasantly surprised and so excited to hear our story on our favorite podcast! The whole experience was really like a dream come true. And the biggest moment of fame Apt. App has had to date.

After the podcast aired we got calls and e-mails not only from around the United States but around the world! From fellow entrepreneurs, investors, various property management companies and even residents and students pleading to get Apt. App for their communities. All of the contacts were incredibly positive and our business has been booming since. We are so grateful for the opportunity NPR gave us. And just to think… What if I kept telling myself we weren’t big enough to get on NPR. It never hurts to try!

Listen to the "How I Built This" Compaq Computer + Apt. App episode now!
Press No Comments